For Information
in Spanish 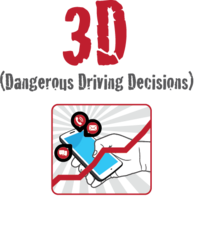 Check out our brochure

AAIM understands the changing world in which we live, where impaired driving is becoming far too normalized. Whether it be alcohol, drug, or technology impairment, we want to encourage drivers to be safe on the road and believe change begins with our youth. Our 3D program, Dangerous Driving Decisions, focuses on choices and making the right choice when we get behind the wheel.

There are many choices that we have to make every day that can either benefit or harm us. When driving on the road, the choices we make are on a life or death basis. We at AAIM are constantly working to promote the choices that keep drivers alive and safe. AAIM to save lives by choosing to never make dangerous driving decisions. Teachers and administrators have an influence in the lives of their students as well. Make it a positive influence by inviting AAIM to speak at your school.

Your Influence
Research shows that parent disapproval is the number one deterrent for underage drinking, impaired driving, and texting while driving. Children also not only care about what their parents say, but follow what they do. Speaking with your child about these dangerous driving decisions and making sure that you are setting a good example can save their life. A simple conversation regarding your disapproval of these issues and setting a positive example could be the encouragement your child needs to avoid taking that first sip, smoking that first joint, sending that first message, and making that first decision to drive impaired.

“Some people still don’t know how dangerous distracted driving is. Others know about the risks of texting and talking while driving, but still choose to do so anyway. They make the mistake of thinking the statistics don’t apply to them, that they can defy the odds.”